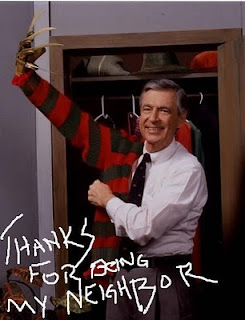 Events of late have made me wonder whether or not my reality has been supplanted by surreality. I don't know, perhaps it has something to do with my recent propensity for 48-hour waking periods, or maybe the oddness is some sort of a ripple effect from Mountain Dew releasing three x-treme new flavors and KFC dropping the gloriously apocalyptic Double Down sandwich within such a short time period. Regardless of the root cause, when I went to go see A Nightmare on Elm Street yesterday, I found myself sympathizing with certain characters in the film, not (only) because I was molested by a groundskeeper, but lately I've been questioning what is real and what (wait for it...) isn't.
For example, in what universe does the following make sense? I recently picked up a 10-pack of plain white Hanes crew socks, since the ones I have been wearing were purchased some time in the early aughts and are beginning to show their age...as in, I attempted to put on a sock and had it tear at the ankle at the first tug. Either the sock was well past its expiration date, or it finally committed suicide, which would be understandable, given that the life of a sock is a sad one. Think about it: socks just sit in a dark, cramped drawer, waiting for the day when you finally pull them out, shove a foot up the entirety of their body and stomp around on their innards for a while, then discard them to a filthy basket of their soiled brethren until they are finally cleansed in a mechanical Charybdis and crammed right back into the dark space for the cycle to begin anew. But I digress. There is a certain element of my pack of Hanes socks that floored me with its awesome display of unnecessary functionality: the plastic package the socks came in bears the boastful tag "Resealable Bag." What? I mean, I just...why? Under what circumstances would you need to reseal your bag of crew socks? It's not like you just bought a package of pastrami; the socks are nonperishable, and they're all going to the same place. Is there someone out there who insists on keeping his socks in the bag they came with, meticulously returning them after washing and carefully sealing the faux Ziplock strip at the top? Undoubtedly. But I never want to meet him, and I certainly don't think he represents a big enough market to create a resealable socks bag. I'm probably more bothered by this than I need to be, admittedly, but it's just so damn confusing.
Not all of my sojourns into the surreal have been so vexing, though. I had a dream the other night I was driving down some street or another while listening to the Insane Clown Posse (I don't remember what song, so don't ask). I stopped at a red light, as people tend to do, and sat in my seat bobbing my head, waiting for the signal to allow me to accelerate. As I grooved, a large freight truck rolled to a halt to the right of me. A quick glance revealed that the truck driver was clad in full black-and-white clown makeup, which I didn't find as odd as I probably should have. After a few moments, he cocked his head in seeming recognition of the music I was listening to through my open window. He turned and looked me right in the eyes, his heavy makeup belying his true emotions, then slowly extended his hand. I leaned over and gripped his hand in mine in a brief but firm display of solidarity. Then the light turned green, and we went our separate ways. That was the entire dream, as far as I can recall. And yet, as odd and sort of retarded as that dream was, I honestly felt a little touched by the whole affair. Since then, each red light I wait at is accompanied by a longing search for my kindred Juggalo, but to no avail. Keep on truckin', my brother.
Finally, and perhaps most surreal of all, Steel &; Marsilio have, of late, actually been creatively productive as a team for the first time in years. I won't even bother to explain this one at this point in time, but those of you who I've known since the turn of the century or so know that this (along with the release of the forthcoming S&M DVD collection) is just shy of a biblical sign of the apocalypse in terms of unlikely portents. Then again, 2012 is right around the corner...but I can't accept that Roland Emmerich might be right about that, since I refuse to lend any credence to one of the creative minds responsible for that shitty Godzilla remake.
2012 crew socks Insane Clown Posse Nightmare on Elm Street Steel and Marsilio

Garrett Steel said…
I can't believe I missed this one, I am rather taken aback by the crew socks faux-Ziplock conundrum myself.

I often have a dream where I need to use the bathroom in either a school or mall setting. Invariably, every stall and urinal (and the walls and sinks) is caked with excrement and I must go in search of a different bathroom. After walking down school corridors, or entire mall floors I eventually find additional bathrooms. Once inside I find them as disgustingly filthy as the first. This process repeats itself for hours and hours until I wake up unsettled. No joke. Any idea what this means?
June 13, 2010 at 10:28 PM

Joey said…
It could mean a few things, I reckon. Could be a metaphor for your internal turmoil, for your struggle to remain clean and sober and your frustration that seemingly everywhere you turn, every answer you find, ultimately leads you back to the beginning. However, you clearly have not given up hope in the face of adversity, and continue to search for the proverbial "clean bathroom" wherein you can finally poop out your demons in peace.
Either that, or you were completely traumatized by the bathroom at the Sacramento Wienerschnitzel.
June 14, 2010 at 8:29 PM

Garrett Steel said…
That is an excellent dream interpretation. Next time I have you do a palm reading on me, it won't be simply for the vicarious thrill of you holding my hand.
June 14, 2010 at 10:14 PM