The Steel & Marsilio Companion, Part 1: Genesis (But Not the Sega Kind) 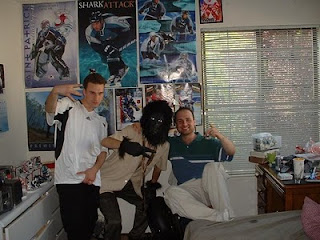 I may as well start in the halcyon days of my youth, before Steel & Marsilio (as a televised program, anyway) existed. Garrett Wroblewski and I met in 1999, when I was a senior and he was a junior at Monta Vista High School in Cupertino, CA. Destiny, for whatever reason (ed. note: Money. It was money) led post-graduation Joey to De Anza, the local community college, and Garrett followed me there soon after. Though in the interim year we hung out quite a bit and collaborated on some things (a skit wherein we played the biggest Kriss Kross fans in the world, complete with dance number, comes to mind), it was not until we both occupied the same space at De Anza that the world began to witness the true genesis of Steel & Marsilio.
Back then (and now, really), Garrett and I enjoyed very simple pastimes. We would go to CD stores, consume the finest fast food Bascom Avenue had to offer, then return to his parents’ house to use the restroom (damn Taco Bravo), kick back with some cheap alcohol and watch television. It was during one of these exquisite atrophying sessions that Garrett came up with an idea. The exact circumstances of his proposal are lost to the sands of time; I don’t recall whether something in particular triggered the idea, or if Garrett just had a profound outburst (I’m willing to bet he doesn’t remember either, due to a variety of grim/comical factors). In any case, the concept he floated was simple: De Anza College was the hub for Cupertino’s public access television channel…why not find out what the parameters were to produce a show? The concept was tremendously exciting as, despite our seemingly sedentary lifestyles, Garrett and I have always been creative types who constantly came up with “Wouldn’t it be funny if…” ideas. Wouldn’t it be funny if we got a chance to actually bring some of our wouldn’t it be funny if ideas to television in some form or another? Sure, we didn’t know the particulars, or even if such a thing was possible, but the very concept had such tremendous potential (plus it might help us pick up chicks) that it made us take a course of action that was, for us, damn near unprecedented: we committed to something.
We soon ventured into the on-campus TV studio and had a brief meeting with Robert Haber (I would say what his title was, but to be frank I’ve forgotten it) about our potential program. He seemed to have his reservations about what two young, Hook-Ups t-shirt-wearing jackasses might consider appropriate for broadcast, but in the end he told us to film a rough pilot and, based on that, he would see about possibly getting us a regular slot. Steel & Marsilio was officially under way, and Garrett and I spent less time procrastinating than we had on any project before or since.
Unfortunately, lack of procrastination didn’t necessarily equate to productivity. Though Garrett managed to get us a digital camcorder as an (extremely) early Christmas present, we clearly had no idea what to do with it. We had a new toy, and decided that if we just filmed everything, something awesomely hilarious was bound to happen. When I really think about it, I marvel at the fact that, upon discovering how to create fire, Ancient Man did not simply reduce the world to cinders. In any case, the only clear vision we had was that we wanted to make a comedy show, which, if our earliest footage is any indication, would seem to involve a lot of night vision shots of random cats, rolling logs down playground slides, and Garrett’s sister fleeing from the camera while shrieking not to film her. Though we certainly got a kick out of this footage, we quickly realized that, if we were going to construct a watchable half-hour program, we would have to do better than clips of me falling into stacks of boxes. And so we began to write.
To our credit, Garrett and I were both more than capable writers. Despite our lack of experience in the medium, we had little difficulty envisioning skits we could do, both individually and as a team. Once we had something on paper, we wasted little time in committing our works to film, during the course of which we learned a couple of things: firstly, that we were severely limited by our lack of budget and crew members in what we could effectively film, and secondly, that twenty some-odd minutes was a longer time to fill than it would seem. Nonetheless, the pilot came together smoothly, if awkwardly. I won’t go into too much detail about it, because I feel the commentary Garrett & I provide about the episode on the upcoming DVD is pretty thorough, but suffice it to say that the pilot was a fun, albeit quite flawed, experiment. The pacing is glacial, some of the more out-there ideas may not have worked as well as we had hoped, and overall it is very clear in watching it that we are still finding our voice. Nonetheless, we were proud of what we had accomplished, and the folks at the TV station seemed to agree. Steel & Marsilio was picked up as an ongoing series. History, as they say, was in the making.
comedy companion DVD history Marsilio Steel Taco Bravo

Anonymous said…
Nice brief and this mail helped me alot in my college assignement. Gratefulness you seeking your information.
August 17, 2010 at 8:36 PM