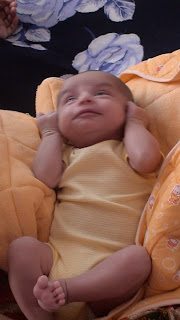 It is a ritual that is repeated like clockwork, once a year or so. Despite its fruitlessness and utter futility, I have been involved in it many a time, and know I shall see it again. The ritual that I speak of is...well, I suppose this will require some explanation.
My father is possessed of the inexplicable idea that he and I listen to the same music. In fact, he has said as much on several occasions. "See, Joe," he slurs, "it's great that we listen to the same music. It's not like I'm some old guy or something; I can listen to your generation's music."
Now, anyone that knows me reasonably well knows that, despite my diverse musical tastes, on average I would say I listen to hip-hop probably 80% of the time, minimum. My father doesn't listen to hip-hop, period. I know this isn't going to change and, to be honest, I don't want it to. But in and of itself, it sort of conflicts with what he claims. Of the other 20%, I usually listen to either hard rock/metal or weird things like Herb Alpert or the Silent Hill 2 Soundtrack. So if we're ignoring hip-hop entirely, whatever similar tastes my father claims would have to fall into this area. Despite my doubts, which I am usually too weary to vocalize, this would seem to be possible. He only listens to rock, and though most of what he listens to is at least 25 years old, whereas most of what I listen to is at least 10 years old, there must be some overlap in tastes, right? This is his claim, and every time, he decides to prove it.
So, while repeating aloud to everyone that will listen his awesome level of identification with today's youth and their music, he asks me to go get him some CDs (maybe 10, maybe 12) that I like to listen to for him to experience, because of course our tastes are so similar that he'll probably just like whatever I bring him. I grudgingly oblige, knowing how this will end. It does require some effort on my part, as there are some albums he simply will not like regardless of their quality. I mean, sure, I could bring down Illmatic or The Low-End Theory for him to listen to, but it would be pointless...even the best hip-hop albums ever made will no doubt fall on deaf ears. So i bring him down a selection of some rock albums I like and then...well, then i usually just leave, because I know what's going to happen.
Basically, as expected, he doesn't like it. He describes Nine Inch Nails as "European techno dance crap" and refuses to listen to any Rage Against the Machine song except "Killing in the Name," as he says they, "all sound the same." He sort of likes System of a Down, saying, "Oh yeah, I like that screaming Jew," but overall it proves too frenetic for him. He puts on Soundgarden, listens to the singles while skipping through the rest of the album, and asks for me to give him some more albums because he doesn't really like these...I need to do a better job of picking out the music I listen to that he'd like.
In the end, he ends up listening to the one album I own that he actually enjoys: Limp Bizkit's widely reviled "Chocolate Starfish and the Hotdog-Flavored Water." He listens to it over and over, and takes it to work to listen to it there. I'll get it back eventually, and it will sit on my shelf for another year until this happens again, and I let him borrow it.
At one point, I asked my father how he could stand the album. Musically, it isn't awful, I said, but the lyrics are probably the biggest atrocity not caused by a dictator that I had ever come across.
"Really?" he said. "I don't know. I don't listen to the words."
family bonding limp bizkit music sensory deprivation