It's Halloween (and Then Some): The Spooky Poetry of Jack Prelutsky 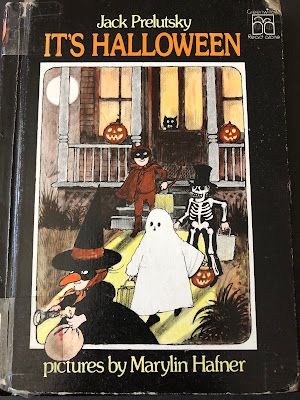 I feel like closing out October with something classy. And since we're no stranger to Halloween poems around here, let's celebrate the onset of All Hallow's Week with some verse, courtesy of the man himself, Jack Prelutsky.
Prelutsky is a distinguished poet whose work tends toward a younger audience. I could give you a full recap of his history, but instead I'll just directly lift this quote from his Wikipedia, which is just...wow:

Jack Prelutsky was born on September 8, 1940 in Brooklyn, New York to Charles, an electrician, and Dorothea, a homemaker. While he was still a baby, a fire killed his family and he was saved by his Uncle Charlie, who was a dad of 56 (Wikipedia)

First of all, this is incredibly tragic and heart-wrenching. Second of all, that 56 has to be a typo, right?
Perhaps fittingly given the horrors of his early life, Prelutsky is best known for his dabbling in some darker material. The best example of this is 1976's Nightmares: Poems to Trouble Your Sleep. 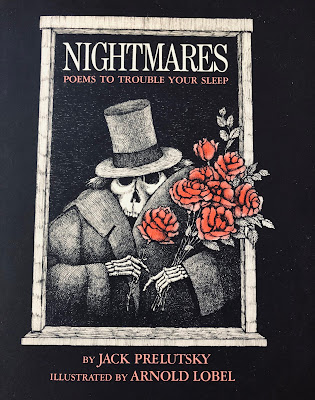 Don't let the "children's poetry" thing fool you; this is some disturbing stuff. Essentially, the book consists of twelve (not thirteen, though? Really?) sinister poems concerning various terrors that haunt the darkest depths of the forest, the loneliest mountain passages, the creepiest crumbling castles. And the one thing they all have in common is that they want to murder you. For example, the bogeyman: 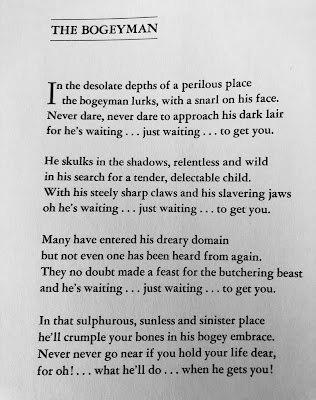 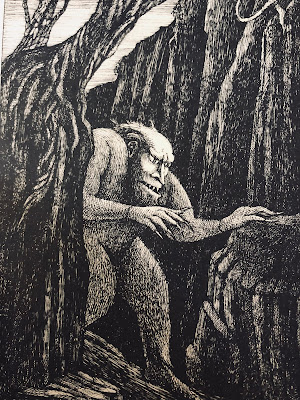 This book is basically what would happen if Shel Silverstein became obsessed with Monster in My Pocket. Each composition here revolves around a different folkloric horror, from the seductive will-o'-the-wisp: 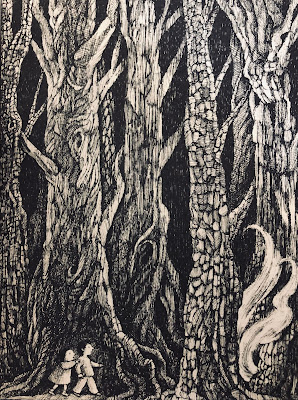 To a classic haunted house: 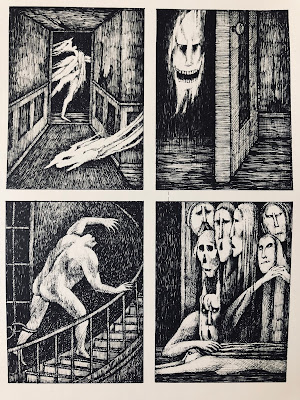 To perhaps the most famous poem here, "The Ghoul": 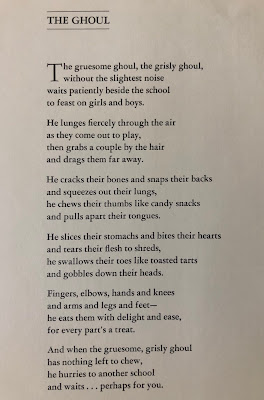 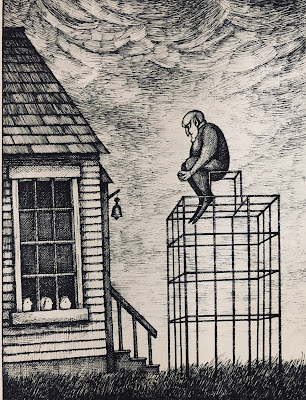 The weirdo hanging out at the elementary school playground, grinning as he waits for the recess bell to ring, is skin-crawling enough. Knowing in shockingly graphic detail exactly how he plans on mutilating a child's body puts this one over the top in terms of ghastliness. On The Folkteller's 1983 album Chillers, where they recount some scary stories for a group of young people on Halloween, they read this poem aloud:

Listen to the audience. Their shocked gasps mixed with tittering nervous laughter say it all: the poem is horror all the way, and the explicit carnage entertains in the same sanguine way that a slasher film does
The sequel to this book, The Headless Horseman Rides Tonight: More Poems to Trouble Your Sleep, is basically an expansion pack for Nightmares, showcasing another dozen horrors to bedevil your restless dreams. 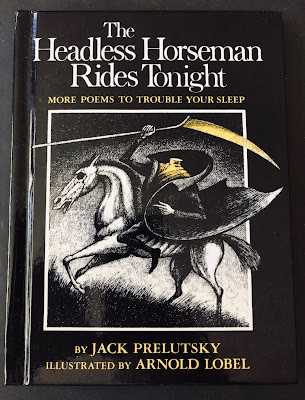 Prelutsky's poetry is as bewitching and relentless as ever, and the grim, Edward Gorey-esque illustrations from Arnold Lobel (who you may remember from the far less fatalistic Frog and Toad Are Friends) continue to provide the perfect wickedly fun accompaniment to the proceedings. To wit, gems like the titular Headless Horseman, a Grim Reaper figure who stalks the night: 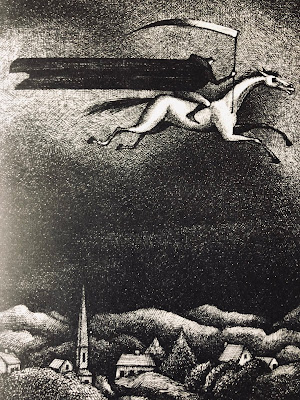 And who could forget the oh-so-charming Darkling Elves? 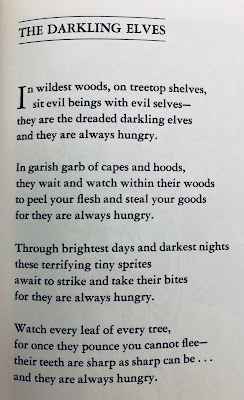 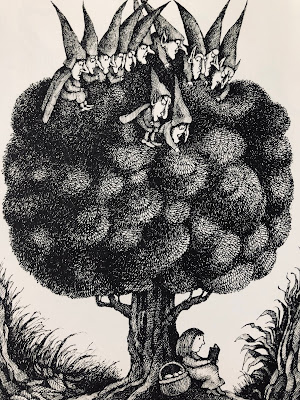 You may have noticed the recurring motif of being devoured alive here. To be fair, there are few things more horrific than meeting that particular toothy demise, other than this.
In summary, Nightmares and The Headless Horseman Rides Tonight are underrated classics in the field of children's horror, and are worth a look by aficionados of all ages that appreciate humorously macabre literature.
But before I go, let's address one more work of Prelutsky's that is a bit less morbid but perhaps even more seasonally appropriate. I speak, of course, of the book whose cover I chose to lead off the article, It's Halloween. 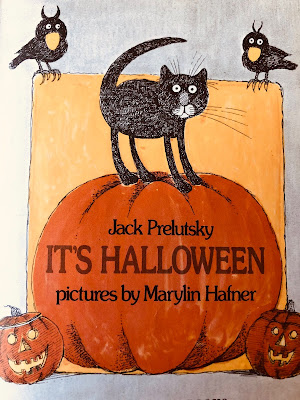 Mmm, that's some good Halloween right there. It's Halloween is geared to a younger audience, so it's less about peeling the flesh off the bones of some poor unfortunate soul and more about, say, bobbing for apples: 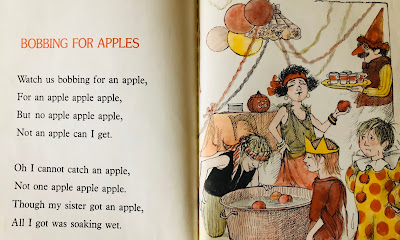 Or begging for candy door-to-door: 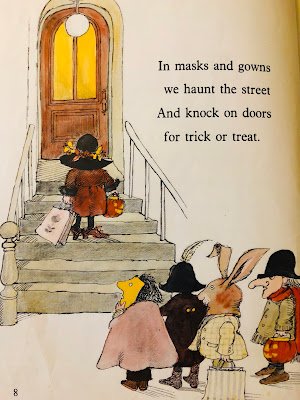 Then we've got The Goblin, who is basically The Ghoul's nerdy cousin who just feels like you just have to read the manga version of My Hero Academia before watching the anime: 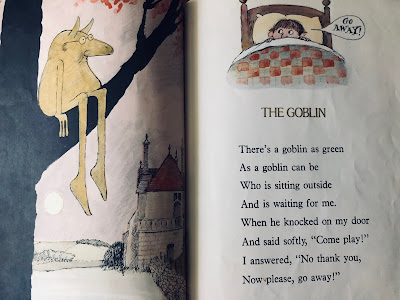 And of course, no compilation of scary poems is complete without a haunted house: 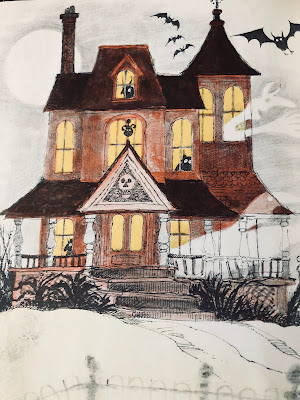 Here we catch another glimpse of The Goblin, enjoying the rollicking house party taking place at this macabre McMansion: 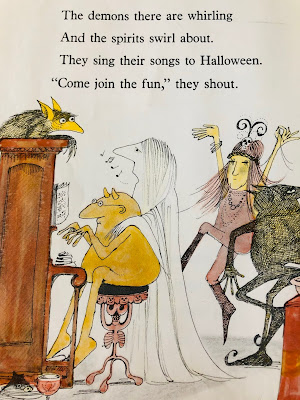 Looks like someone found a waifu! In any case, It's Halloween is exactly what it claims to be: a fun, festive collective of verse well suited to All Hallow's Eve and the eves surrounding it. If you're looking for a hit of holiday fun without all the lung-ripping of Prelutsky's other works, this is where it's at.
There's also an audio book version of It's Halloween for your listening pleasure, if you'd like to hear some of the poems as jaunty little songs:

There we go...you'd better have your copy ready to read along!
I hope you've enjoyed this look at some seasonally appropriate poetry from one of the true icons of the craft, and I hope you have a happy Halloween! And remember: if you happen to be in charge of checking the kids' trick-or-treat haul for harmful foreign objects this year, I hear people really love to stick razor blades in Reese's Peanut Butter Cups. Better confiscate them all, just to be sure. 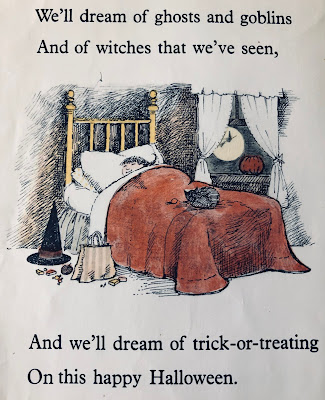 Joey Marsilio would love to fill your trick-or-treat bag with copies of his debut novel, Henry Garrison: St. Dante's Savior, but recent tests have proven it to be more or less inedible.