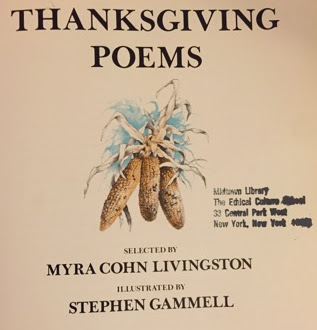 After three Scary Stories to Tell in the Dark Power Rankings articles (here, here and here), as well as another post delving into some of his more obscure horror artwork, you can probably tell that the artist Stephen Gammell has a special, terrifying place in my heart. It therefore always brings me great joy when I find Gammell's artwork lurking in the most unexpected of places. Like, say, this book of Thanksgiving poetry. 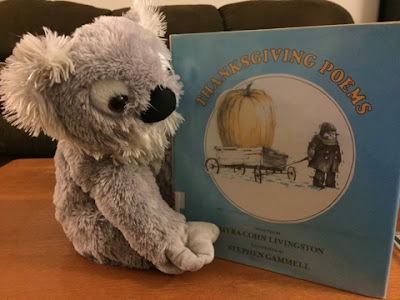 Koala not included.
When I ordered Thanksgiving Poems from Amazon, I had no idea what to expect. Which is funny, given that the title is pretty self-explanatory. This thing is, though...the poems aren't really what I'm here for. they're nice and all, but I'm far more interested in what Gammell is bringing to the Thanksgiving table. Would the book be chock full of grotesque imagery, like reanimated turkey corpses hunting for human giblets, or perhaps gravy bowls oozing bloody tendrils? Unsurprisingly, no. Actually, when you open the book you are greeted by this fellow: 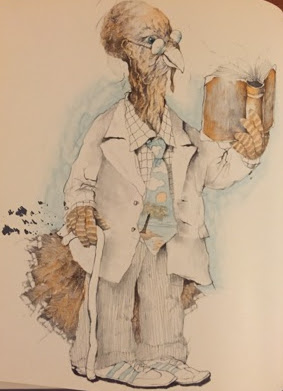 Now, granted, this turkey/man abomination is an affront to God and nature, but he seems friendly enough. He's scholarly and dignified, and his suit-with-desert-island-tie-and-Adidas ensemble is the perfect mixture of class and sass. Let's call him Cornelius. 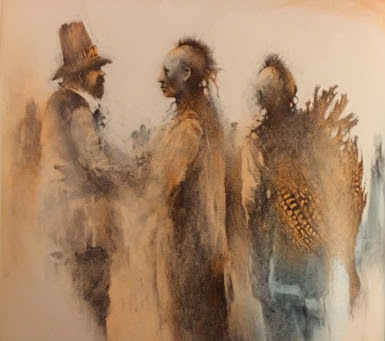 Up next we have this portrait of an interaction between the Pilgrims and Native Americans. Here it becomes apparent that even in a non-horror context, Gammell's artwork retains its ethereal and otherworldly qualities. Which is to say, it looks really damn cool. The guy in the middle kind of reminds me of the head from the cover of the first Scary Stories, though. In the poem itself, the Pilgrims thank God for only killing off half of them, which is maybe the ultimate example of a glass-half-full way of looking at things. 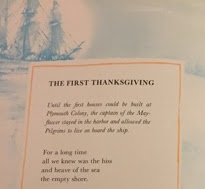 This page has the distinction of making the Mayflower (in the upper left corner) resemble a ghostly pirate galleon. Based on the illustration, if you had told me that the first Thanksgiving was a party thrown by a bunch of skeletons in tattered rags, I wouldn't have been the least bit surprised. 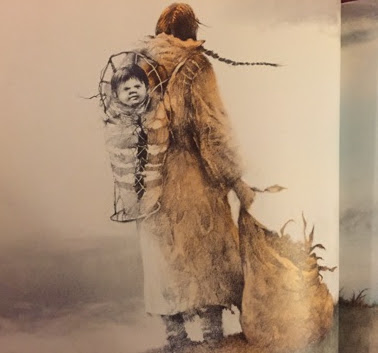 This image of the first Baby Bjorn prototype makes sure to emphasize the baby's distaste for his portable faux coffin. 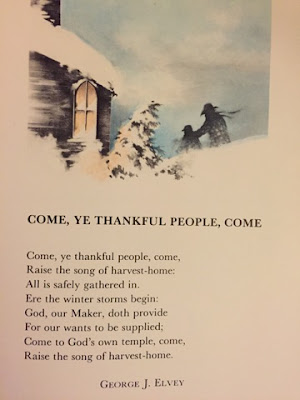 Is this some folksy artwork depicting family members arriving home for the holidays together, or a grisly portrait of one man strangling a child in the snow? You make the call. 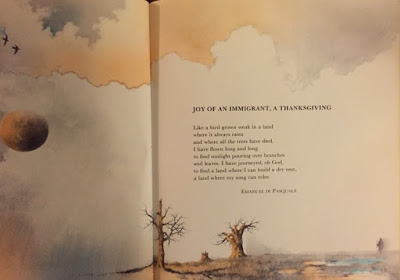 This is a rather lonely, eerie illustration that could very well depict the surface of some alien planet. But at least the little guy down in the corner is happy, at least according to the poem. 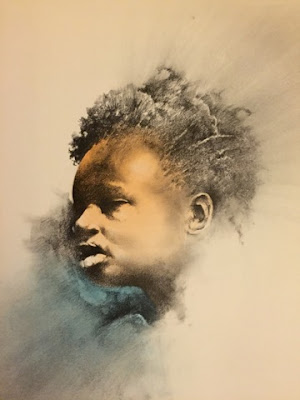 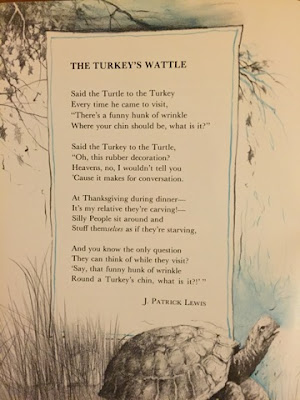 I admit it: I don't know why there is a turtle here. I get that the turtle is in the poem itself, but why? Why is there a turtle in there at all? It's actually a pretty morbid reflection on Thanksgiving from a turkey's perspective, but why a turtle instead of literally anything else? Is it because "turtle" and "turkey" sound vaguely similar? In any case, all my questions are moot, because the picture of the turtle is cute and that's really all that matters. 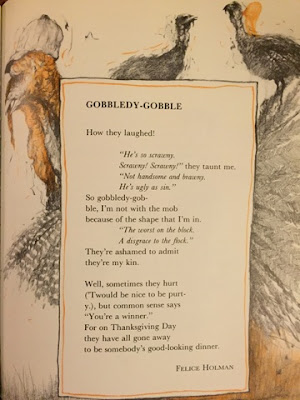 And speaking of morbid reflections on Thanksgiving from a turkey's perspective, we have this bit of gallows humor right here. An ugly turkey (wearing a hat?) gloats as his better-looking compatriots are slaughtered and consumed on Thanksgiving Day. It's probably the closest this book comes to actual horror. One thing is certain: Cornelius would certainly be far too dignified to engage in such schadenfreude. 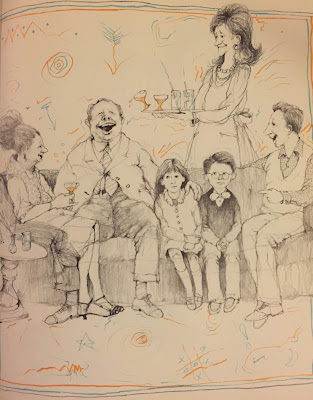 These guffawing drunks flanking a pair of bored, uncomfortable children constitute perhaps the most accurate portrayal of Thanksgiving Day that I've ever seen. 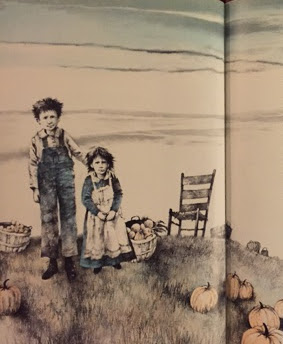 Then we have the Children of the Corn here, hoping that you'll be the next blood sacrifice to their dark lord of the harvest... 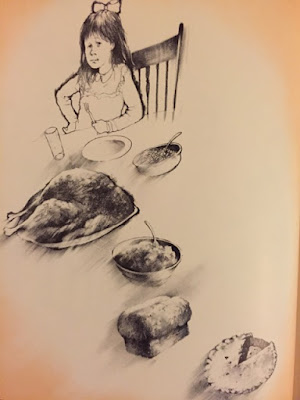 ...while an ersatz Veruca Salt presides over a Thanksgiving feast she undoubtedly had no hand in creating. 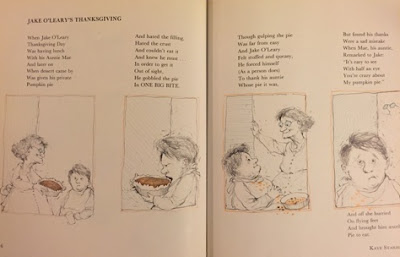 What follows is the sad saga of one Jake O'Leary, whose misguided plan to choke down an awful pumpkin pie to appease his grandmother backfires in the form of another pie being baked just for him. Amateur. Just fake a stomach flu next time, kid. 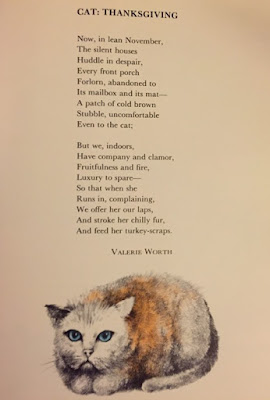 The pissed off cat depicted here is adorable beyond words. Poor kitty. He's probably just annoyed because Martin hasn't showed up yet. #scarystoriesjokes 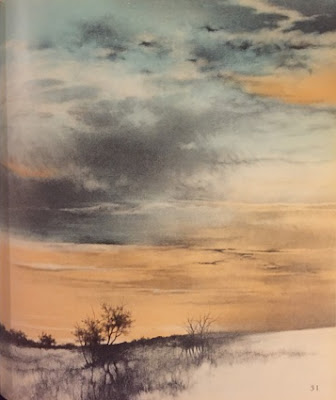 Finally, there's this gorgeous, if desolate, landscape. Though certainly not the Thanksgivingiest image you've ever seen, it is emblematic of the book as a whole: a lovely, serene showcase for Stephen Gammell's artistic talents. Though the man may be most famous for his chilling portrayals of eyeless specters and macabre hellscapes, the fact is that his creative vision and ability to execute it are second to none. His work elevates whatever material it accompanies to an absurd degree. Hell, the strength of his name alone made me buy a book of Thanksgiving poems! You wanna talk holiday miracles? Well that's one right there.
I hope you and yours have a happy Thanksgiving and find some time to just relax and enjoy the season. If you're bored, you can always read my other seasonally-appropriate articles about a book of Thanksgiving stories from the early 20th century and Trader Joe's turkey lunchmeat. It's a cornucopia of shameless plugs!