My Little Halloween Town Display: A Portrait in Words and Also Portraits 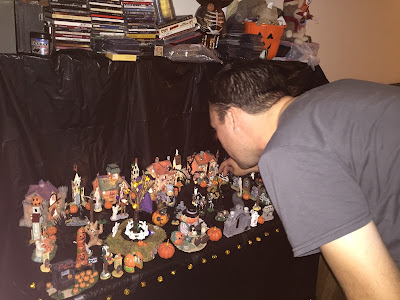 It started in the early 90s, I think. While flipping through the monthly edition of the Oriental Trading Company catalog, I had spotted something I just needed to possess. You see, one of the great virtues of the Oriental Trading Company, besides sounding like an organization that would possess a fleet of merchant ships to be plundered by Jack Sparrow and his ilk, was their yearly cornucopia of Halloween merchandise. Every year in the late summer, OTC's usual inventory of cheap party favors and candy sold by the gross was joined by a plethora of goodies featuring ghosts and goblins, often in the form of cheap party favors and candy. On this particular year, though, one of their seasonal offerings stood skull and shoulder bones over the rest: a haunted village. Consisting of resin statuettes of various structures and characters, the components shared a unique and interesting tall, thin visual style, from the haunted house with a many-windowed pumpkin for a top floor to the gangling mummy loping around. I managed to snag the package deal, containing all the available figures for a reduced price, and that year I would proudly display a Halloween town of my very own until about mid-November, when my parents forced me to take it down.
Of course, like any good god-emperor, my thoughts soon turned to expansion. Fortunately, the next year I would receive a great gift in the form of "Scare Acres," another spooky village that I could merge into my growing monstrous metropolis. The design of these pieces was more goofy and cartoony than my original village, but they added a vital component: light-up houses! No longer did my citizens have to lurk in darkness, lit only by the pale, flickering glow of tiny, D-battery-eating jack-o'-lantern lights. Thus did my village escape the Dark Ages. Progress was under way, and nothing could stop it.
Since then, the town has never stopped expanding. A few pieces have broken here and there, and many more have been added to take their place. At some point, I found a store (either Michael's or MacFrugal's...I can't recall) that was selling the original OTC statuettes, with some minor differences. The paint job was not quite as good, and there were a few new figures. I added the new ones and a smattering of doppelgängers of old favorites. Eventually, a company called Lemax changed the game with their Spooky Town collection, a near-overwhelming assortment of tricksters, treaters, and haunted houses of every shape and size that grows every year, allowing for near-infinite customization of my once humble village. I always swing by Michaels every October to pick up a piece of two to add to my display. Unfortunately, I have held off on buying the larger and more lavish pieces of this collection, both for space and budgetary reasons. Still, I'd like to think that my Halloween village's rather meager size gives it a sort of quiet dignity, and still serves as an impressive departure from those humble beginnings decades ago.
All this is to say that I just set up my village for this year, so without further ado, I present a series of photos showcasing some elements of the display in all their glory. 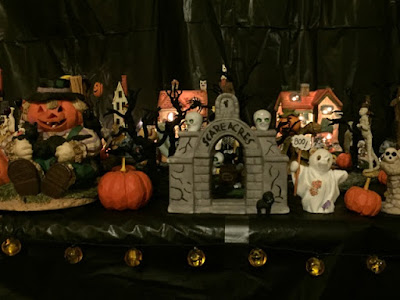 The front gate of town, from the Scare Acres set. I don't consider the whole village to be called Scare Acres, though; rather, this is a legacy piece, a singularly historic piece of architecture from a bygone age. Yet for all the thought I've put into this, I don't have an official name for the town as-is. 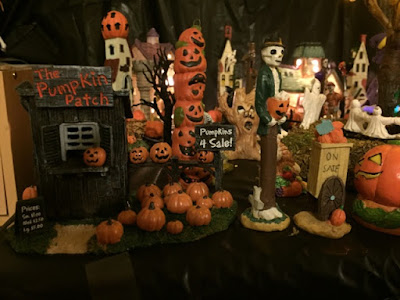 The pumpkin patch area, staffed by this enigmatic and dapper skeleton. I wish I could get pumpkin prices like that around here. 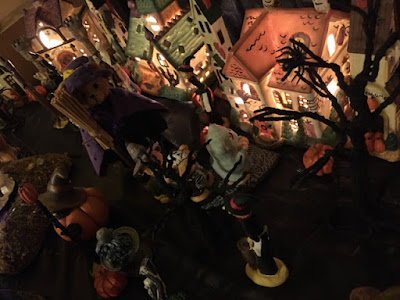 A mother bear takes her cubs out to trick-or-treat. I'm not sure this is the safest neighborhood for that, but judging by the size of Momma Bear, she can handle it. 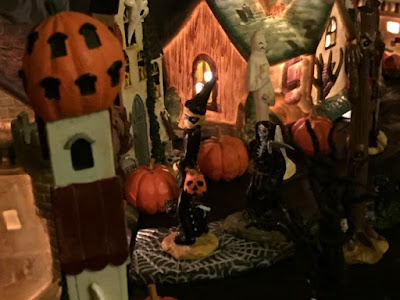 This young lady, on the other hand, has no such savage beast for a bodyguard, and is rightly concerned for her safety. 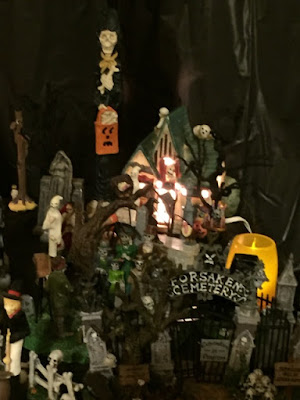 The Forsaken Cemetery, which is basically the quarter of the display on the right. "Forsaken" is probably the wrong word for it, since it contains more figurines per square inch than any other area. 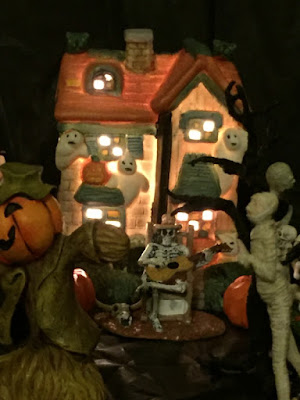 Outside the cemetery, this fellow just wants to chill in his rocking chair and jam on the guitar, unperturbed by the wailing souls of the damned behind him. 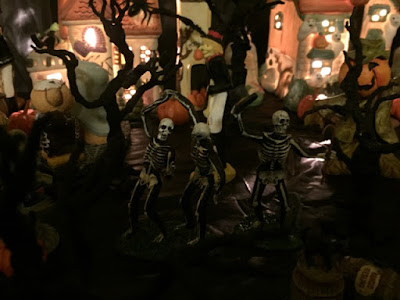 Down the street, these skeletons are living it up, dancing in the streets with not a care in the world. In fact, you could say they're having a skel of a time!!! I'm sorry. 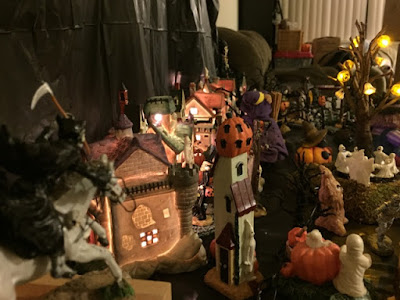 Unbeknownst to these revelers, though, Death approaches the town from a nearby hilltop, wielding a scythe atop a pale horse. Then again, perhaps it's not such a big deal, since it seems most of the inhabitants here are already dead. Maybe Death just has a party to go to. 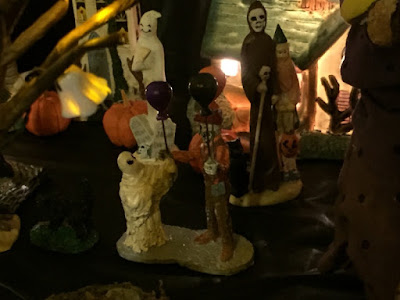 Finally, in the sweetest scenario, a little ghost buys a balloon from a skeleton. Is this the ghost of a dead child, or merely a living child in a ghost costume, and if so, what happens to him when Death gallops into town? Err, maybe this scenario isn't so sweet after all.

I hope you've enjoyed this glimpse at another one of my weird hobbies. Don't forget to soak in the Halloween season this year...it can fly right by if you're not paying attention. And if you have any suggestions regarding a name for my village, feel free to run them by me. "Haunted Village Display" isn't really a suitable moniker for a thriving community such as this one, and I try to do right by my citizens, living or otherwise.

Joey Marsilio has written a variety of articles related to Halloween, including some about scary stories and pumpkin carving. He also wrote the novel Henry Garrison, which you can preview here.