The First Book I Ever Wrote

April 01, 2015
Even though my ostensible first novel only came out a few years ago, I've been writing ever since my chubby little fingers were capable of scrawling squiggly approximations of letters. I distinctly remember some of my school journal entries being succinct fictional works, many of which involved Godzilla or a sentient puddle of acid with grizzly bear arms named Gory Glob. Eventually, I took the next step and started creating full-length works. That's right, Henry Garrison wasn't actually my first book...not by a long shot. Don't believe me? Well check this out! 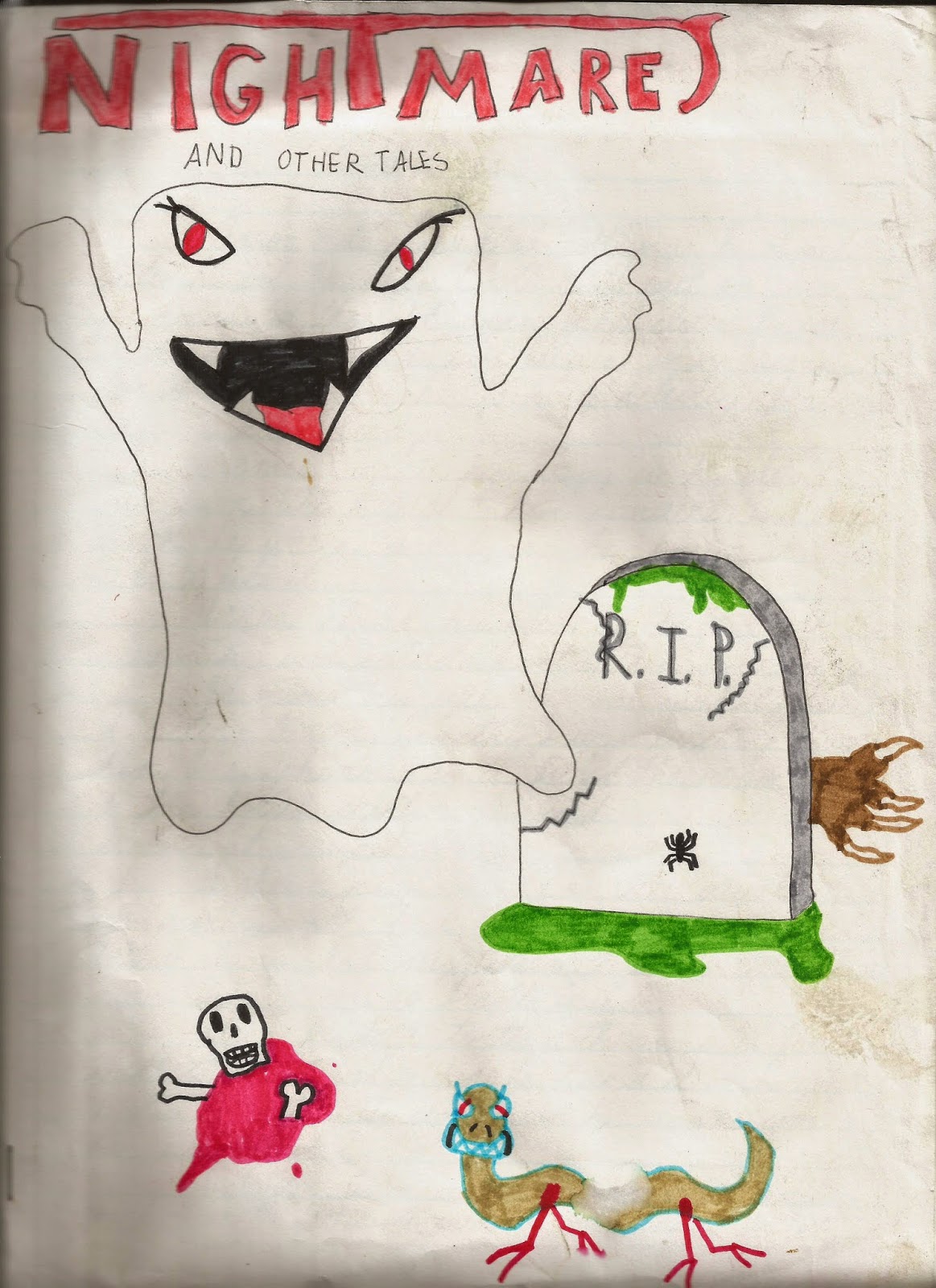 That, my friends, is the cover of my first book, Nightmares and Other Tales. If you aren't familiar with the 1993 best seller charts, you'll just have to take my word for it when I say that this baby was lighting them up. And with a cover like this, how could it not? I mean, you've got a tombstone with a spider and slime AND a spooky monster claw poking out from behind it. You've got a puddle of blood and bones that is apparently surprisingly deep. You've got a grinning snake thing with spindly little chicken legs. And presiding over it all, a ghost so scary that his eyes can't even form a consistent size and shape. So terrified was I by this cover, in fact, that I forget to put my name anywhere on it! Scared speechless, indeed.
Nightmares was the result of a childhood clearly molded by Scary Stories to Tell in the Dark and its literary ilk, as well as Monster in my Pocket and other strange toys and games that glorified the supernatural and grotesque. Horror was my drug, and I was in love with the proverbial coco. As such, when given the opportunity in fifth grade to create a book for a school project, there was no doubt that I would jump at the chance to fill its pages with various creepy crawlies and bumpers in the night. And so I did, venturing forth into the previously uncharted world of publishing with my sure-to-be masterpiece. Here's the first page of the book: 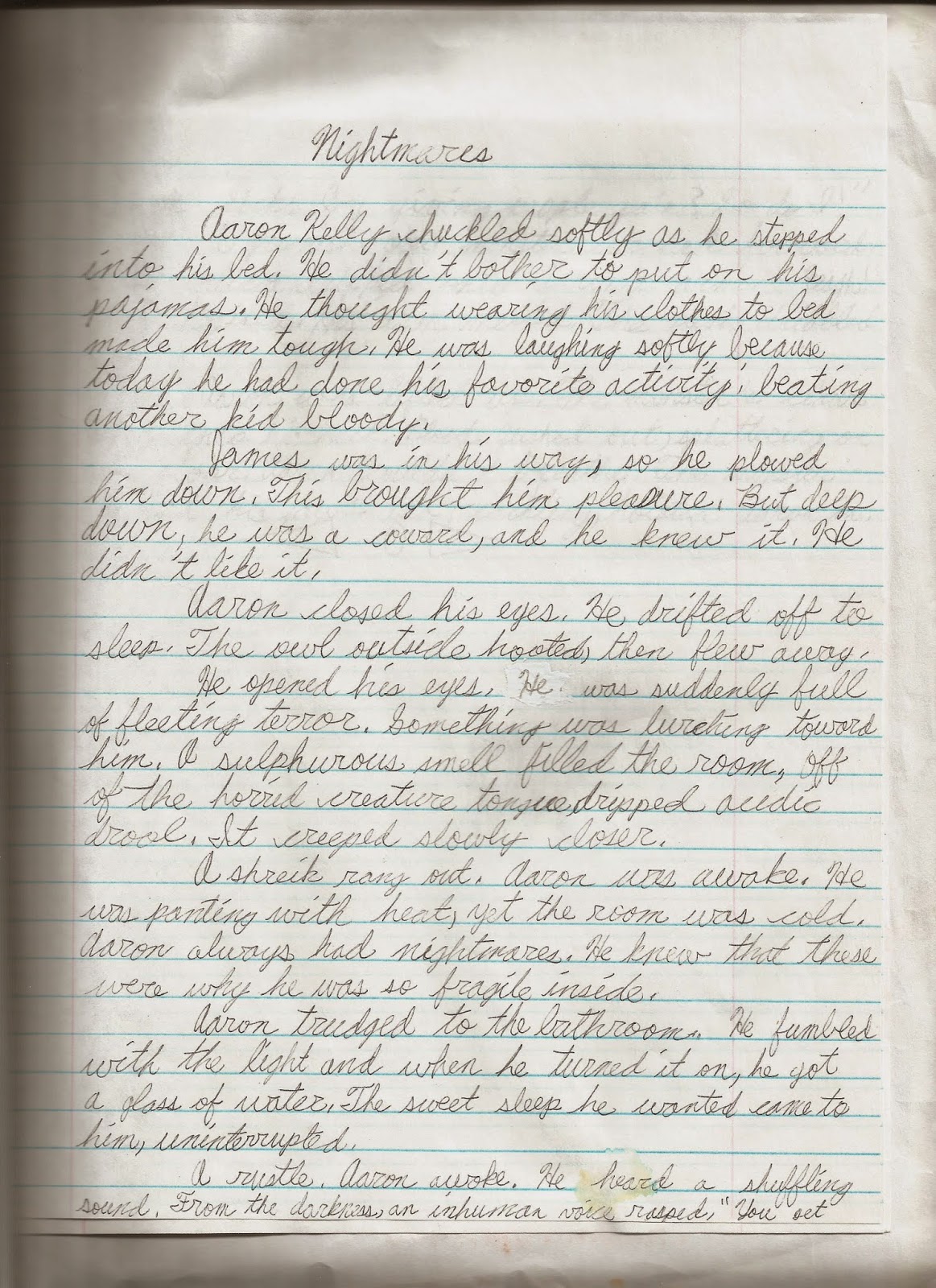 This was clearly some next level calligraphy-type sh*t that today's publishers don't know nothin' about. But, just in case you don't wish to decipher my beautiful runes, I have laboriously re-typed the entire story for your reading "pleasure." Presenting, for the first time on the World Wide Web, "Nightmares," from Nightmares and Other Tales.

Aaron Kelly chuckled softly as he stepped into his bed. He didn't bother to put on his pajamas. He thought wearing his clothes to bed made him tough. He was laughing softly because today he had done his favorite activity: beating another kid bloody.
James was in his way, so he plowed him down. This brought him pleasure. But deep down, he was a coward, and he knew it. He didn't like it.
Aaron closed his eyes. He drifted off to sleep. The owl outside hooted, then flew away.
He opened his eyes. He was suddenly full of fleeting terror. Something was lurching toward him. A sulfurous smell filled the room. Off of the horrid creature's tongue dripped acidic drool. It creeped slowly closer.
A shriek rang out. Aaron was awake. He was panting with heat, yet the room was cold. Aaron always had nightmares. He knew that these were why he was so fragile inside.
Aaron trudged to the bathroom. He fumbled with the light and when he turned it on, he got a glass of water. The sweet sleep he wanted came to him, uninterrupted.
A rustle. Aaron awoke. He heard a shuffling sound. From the darkness, an inhuman voice rasped, "You get your kicks by giving people pain? So do I!"
A greenish-gray monster lurched forward. Its saliva dripped onto Aaron's arms. "Eeagh!" he shrieked. His arm melted. The flesh dribbled off.
Aaron was lifted up. The monster's claws dug into his neck. Blood gushed out, splattering on the floor. Aaron couldn't breathe. The monster opened his jaws and, cackling, hoisted Aaron in.

Is your blood running cold yet? The Scary Stories to Tell in the Dark influence is quite overt from the get-go, as the title character here, Aaron Kelly, is named after the dancing re-animated corpse from Alvin Schwartz's seminal work. Beyond that, it is perhaps not the most sophisticated work, with a bit too much telling instead of showing, some primitive sentence structure, and nowhere near enough graphic sex. It could perhaps use some fleshing out, but as the old saying goes, brevity is the soul of wit. And who is wittier than eleven year-old me? No need to answer that.
Of course, no tale of terror is complete without an accompanying image of...uh, terror, so naturally there's a bone-chilling illustration here, which I would never be so cruel as to keep to myself: 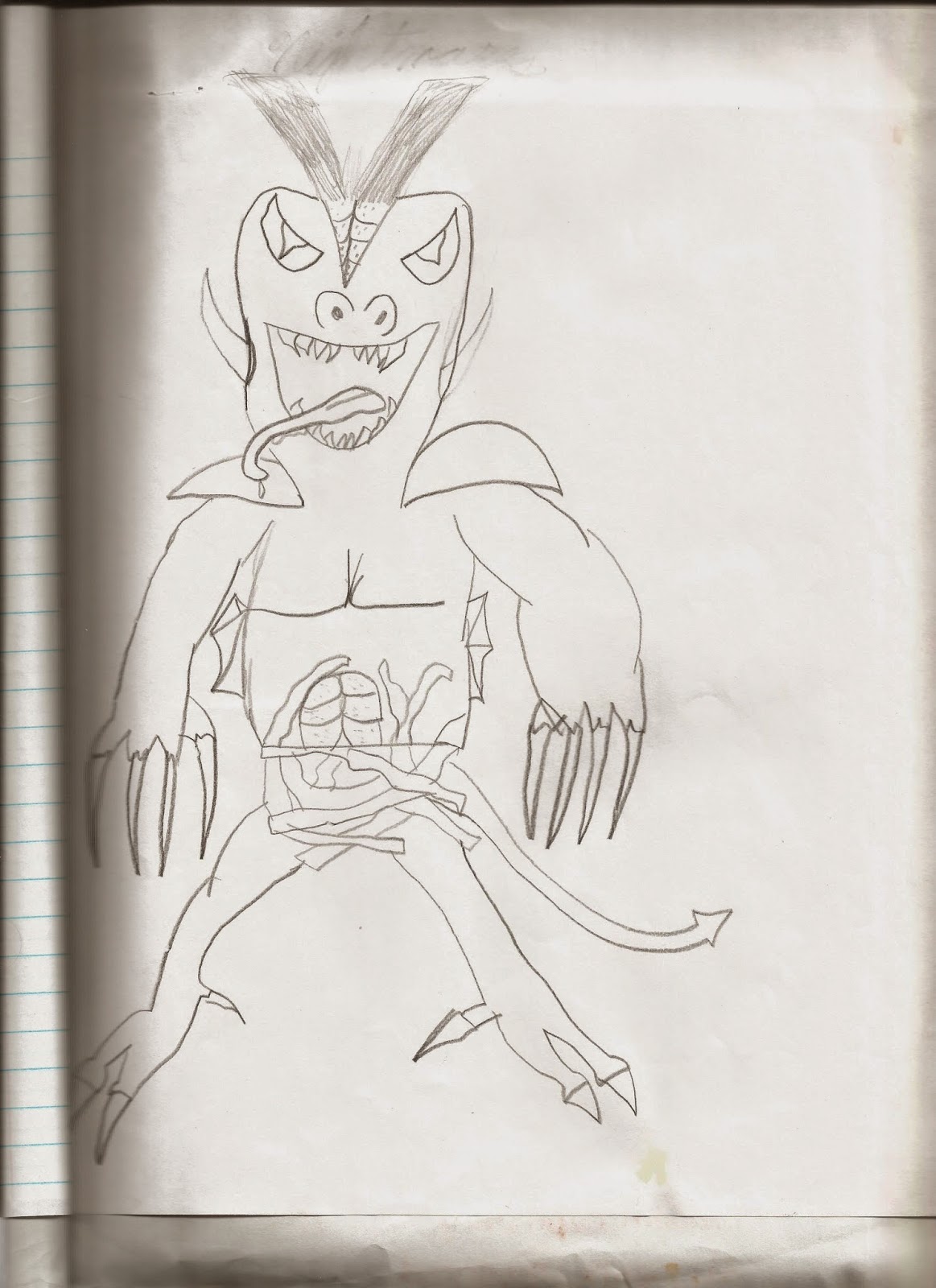 Nothing says "fear" like a V-shaped mohawk, forehead abs, side fins and bacon strip underpants. Mark my words, some day this monster will be enshrined in the Horror Hall of Fame alongside Michael Meyers, Freddy Krueger and Large Marge.
Up next we have...nothing. Well, not quite nothing. We do have the back cover with corresponding copyright date and publishing company, printed in the classiest shade of neon orange I can find, but that's it. 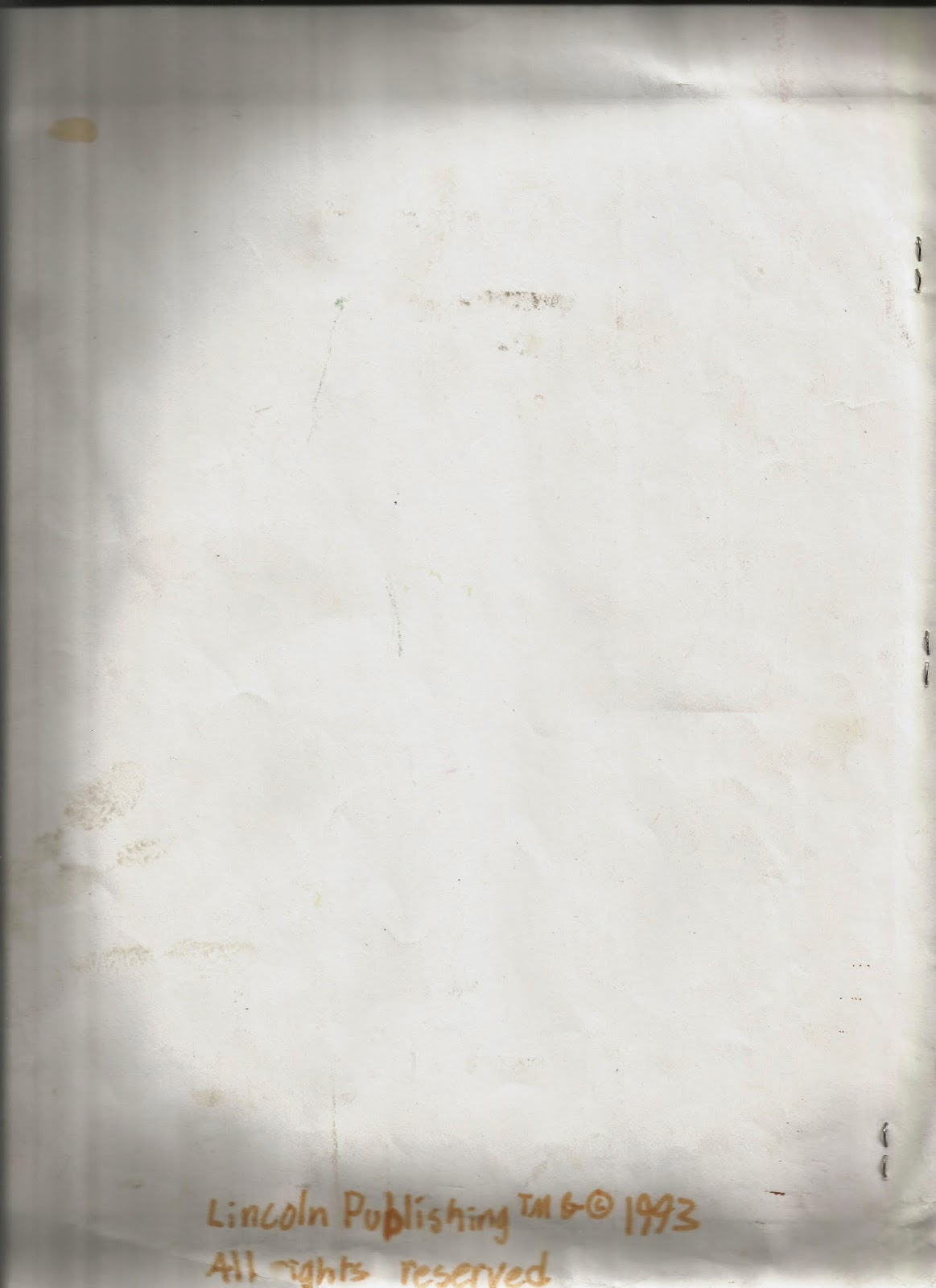 Now you may be thinking to yourself: isn't this book called Nightmares and Other Tales? Where, then, are the other tales we were implicitly promised? What a, you may still be thinking, ripoff! To wit, allow me this rebuttal, from inside the front cover of the book: 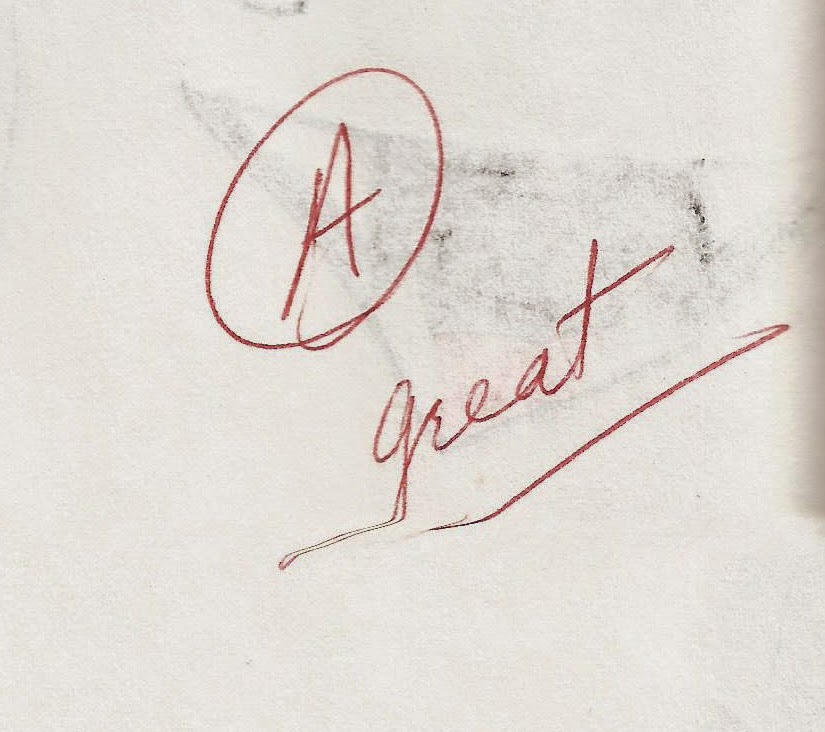 Yeah! Suck on that, haters!

Sadly, Nightmares and Other Tales has been out of print for so long that you can't even get a copy on Amazon. But you can get a copy of Joey's other book, Henry Garrison: St. Dante's Savior, if you are so inclined. Please, please be inclined.
1993 Alvin Schwartz books childhood trauma creative writing fiction Horror nightmares Nostalgia Scary Stories Scary Stories to Tell in the Dark writing