Christmastime in Hell: The Adventures of Dino Riki

December 17, 2013
The nightmare starts the same, every time. I'm out for a stroll in the jungle, and no matter how exhausted I may get, I can never stop walking. Wild animals, insects and weird fish attack me for reasons beyond my comprehension, and I ward them off by throwing that most primitive of weapons: the rock. Eventually, I happen upon a stone axe within some underbrush, and just as I'm starting to feel good about my chances of survival in this savage wilderness, the lily pads appear on the horizon, and my heart fills with despair...

I was seven years old when this photo was taken on Christmas Eve: 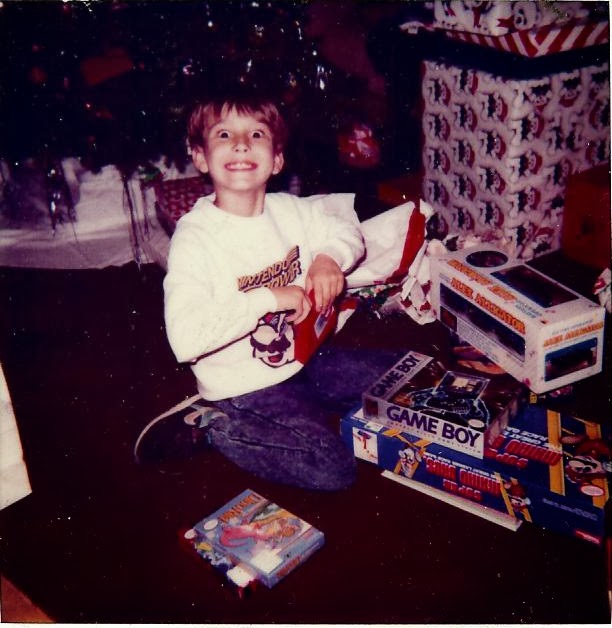 For most of my life, my family has been on the lower end of the disposable income spectrum. However, there was a time, so long ago in my youth, when my grandparents were doing pretty well financially. This meant that Christmas would entail a veritable bonanza of gifts from them, which in my case meant several Nintendo games. As you can see, I'm pretty pleased with my bounty of 8-bit goodness. If only I could have foreseen the angst that was to follow.
You see that little blue box there by my knee? That contains a video game known as The Adventures of Dino Riki. It's a video game in which you, a humble caveman, square off against vicious dinosaurs and other prehistoric beasts. I had never heard of the game before, but the idea seemed simple: Nintendo plus dinosaurs? How could that be anything but great? So when I got home that night, I popped in the cartridge, fired up the Nintendo Entertainment System and prepared to have my mind blown. And, well, something did blow, that's for sure.
The game starts out innocently enough: your neanderthal avatar charges forth, being swarmed by bugs and strange pink horned creatures, which you savagely pelt to death with rocks, stone axes, and boomerangs (I guess this takes place in mesozoic Australia). So you're going along, murdering wild animals and enjoying yourself by slaking your primal thirst for blood, and then Dino Riki happens upon a pond full of lily pads. At this point, my yuletide gaiety went right out the window, being replaced with intense rage and self-doubt.
Allow me to explain what I mean. As you can see here, the game takes place from an overhead perspective. 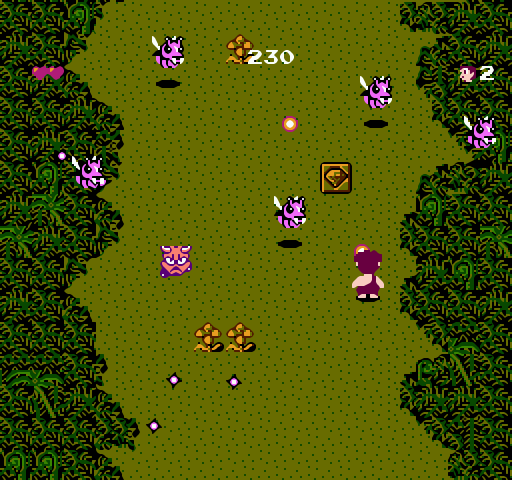 It's not directly overhead, since the view is from behind the main character, so it falls somewhere in the range of a 3/4 perspective. Sort of. In most respects, this is just fine. It places you right in the thick of the action and reinforces the notion that all these creatures and deadly objects are flying right at you. The one downside of a perspective like this is that, were one so inclined to include jumping sections in the game, it could be a bit tough to gauge your landing point exactly. Pair that with the fact that Dino Riki runs around like a pterodactyl out of hell and moves like he is sliding around on patches of black ice, and one might imagine that no programmer would be sadistic enough to expect players to make super precise jumps, right? Or that, at the very least, they'd give the player ample time to gauge said jumps?
As you've probably guessed, this is unfortunately not the case, because of one more quirk of the game design: the screen is always scrolling forward, pushing you ahead. That's right, so not only are you expected to make precise jumps despite the difficulty of gauging a landing point and slippery controls, but you're also mindlessly marching forward the entire time while trying to make them. So when the game throws an entire lake full of giant lily pads in front of you to traverse, you've got to bounce across them and do so post haste. And, since of course this is all not torturous enough, these countless lily pads you're supposed to be jumping on? 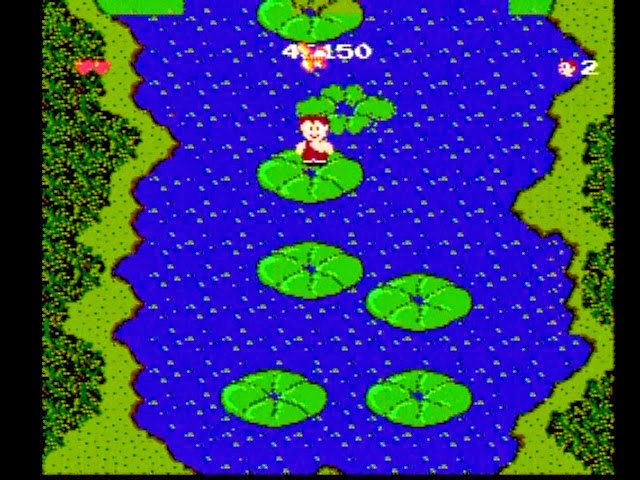 Yeah, they submerge underwater every few seconds, killing you if you happen to be on them because apparently the guy who lives next to several large bodies of water never learned to swim. In all, this is the pinnacle of annoyance, the platonic ideal of an unfair video game deathtrap.
Now, here's the thing: many Nintendo games are difficult. Like really, REALLY difficult. There's a reason the phrase "Nintendo hard" exists, and beating historically tough games like Ninja Gaiden has always been kind of a dorky badge of pride. But you see, those kind of games tended to ramp up in difficulty as you played, giving you something to work toward as the game progressed. They were tough but fair, like former 60 Minutes anchor Mike Wallace. The Adventures of Dino Riki, on the other hand, sets these absurd challenges before you IN THE FIRST LEVEL. That's right, the controller is still cold in your hands when the game ramps up the difficulty into nearly impossible territory. So you play for a few minutes, you end up losing all your lives by falling into the water, you go back to the beginning of the game, you rip the cartridge out of the system and you hurl it against the wall, you despair that we all live in such a cruel and heartless world. It's the sort of relentless, brutal game that inspires a crisis of faith in you, and there's no worse time for a crisis of faith than Christmas. Self-doubt creeps in like the aroma of rancid eggnog; am I really so unskilled that I can't even beat the first level of this stupid game? Up until that moment of crisis, I had figured I had a least a decent amount of gaming skills. But what if, Dino Riki whispered in my ear, it had all been a lie? What if, like Santa Claus or an advent calendar full of non-stale chocolates, my talents were all just an illusion, conjured up by other, more coddling games to distract me from the fact that I well and truly sucked? It's difficult to have a merry Christmas when a set of virtual lily pads is shattering your sense of self-worth. Especially when you're too young to slip some whiskey into your hot chocolate.
Eventually, the torment became too much, and Dino Riki was relegated to a cabinet where it would sit, neglected, a reminder of my shameful secret suckiness. Yet through the years, it continued to haunt me, a literal manifestation of the Ghost of Christmas Past, and I would pull it from the shadows and give it another shot. Every time, that first level would beat me anew, reopening those olden winter break wounds and rubbing festively-colored salts in them. Even eighteen years later, when my roommate and I decided to give the game the ol' post-college try, switching off the controller and making our collective best effort, the first level still mercilessly kicked our asses. Our hopes of conquering this prehistoric beast were swallowed up, just like Dino Riki himself in the icy depths of the ocean. 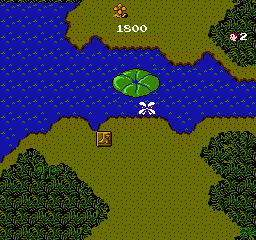 Fortunately, much like It's a Wonderful Life, this holiday tale came to a happy ending before circumstances drove me to take my own life. You see, there is an invisible power-up right before those lily pads that gives the player the ability to fly. I never knew this until discovering it in a joyous accident last year, when I made another attempt to exorcise this dino-demon. After stumbling upon it, for the first time in my life I was able to pass the floating conglomeration of puke-green hell and see the rest of the game. And...it wasn't that hard. Oh, it wasn't easy, but it wasn't the sort of brain-twisting, heart-stomping, puppy-kicking cruelty that the first level forces you to endure. The rest of the game was, in a final sick joke, tough but fair. #MikeWallace.
So had all my holiday hand-wringing throughout the decades been for naught? Perhaps, but as Santa Claus once said, "It's always darkest before the dawn." Or maybe that was Harvey Dent, I'm not sure. Either way, I hope you all have a wonderful holiday season free of petty frustrations, and from all of us at Joeymarsilio.com (that is to say, me)...watch out for the cops! 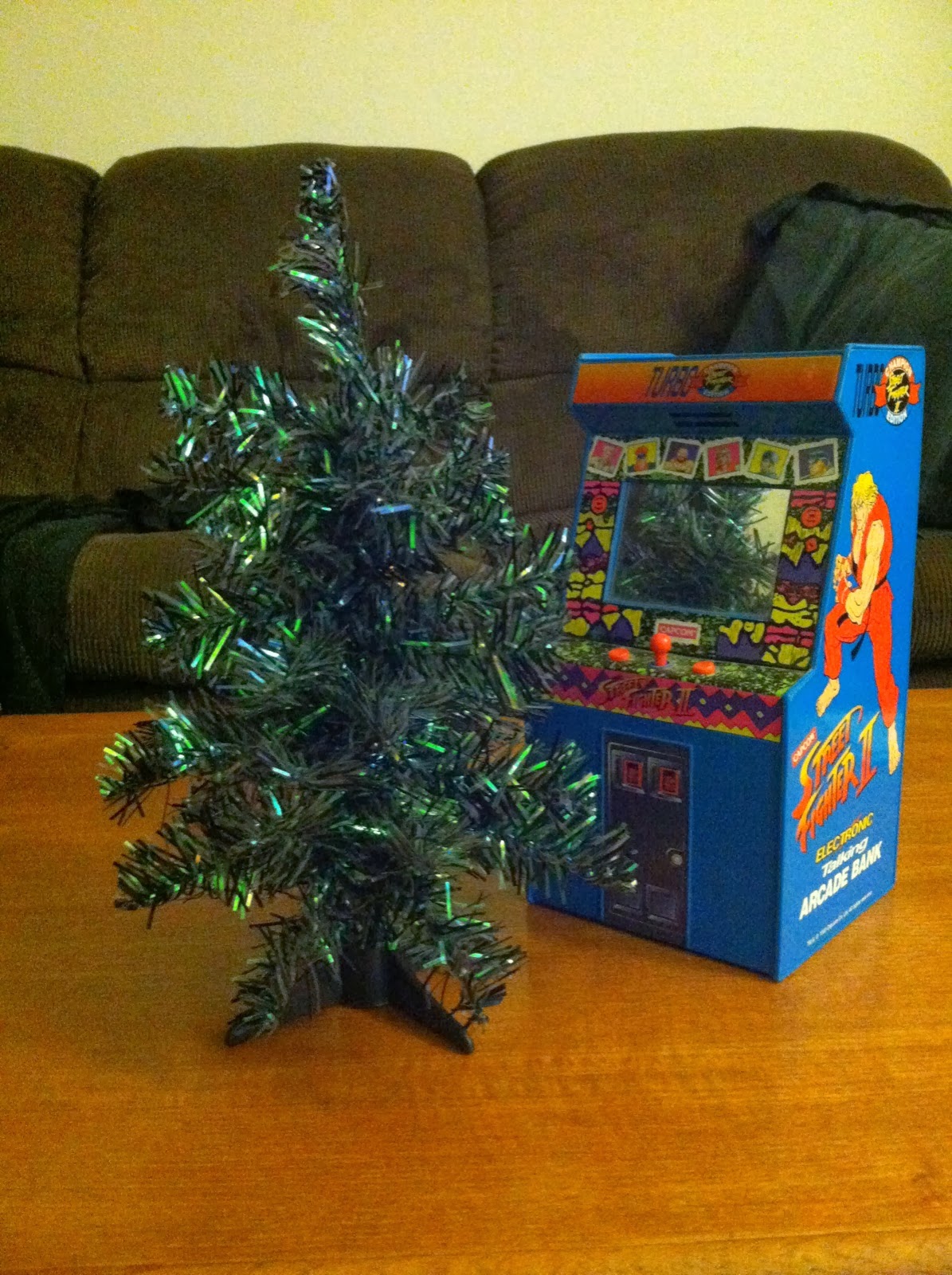