I wrote this several years ago and submitted it to McSweeney's. They didn't publish it, but I got some pretty positive feedback on it. I figured I would share it with the world in the hopes that someone might derive some joy from reading it.

I’m sitting on a curb in the Vandelay Center mini-mall, the dark concrete shimmering and waving as though it’s about to warp out of reality or something.  The sun is perched above the earth in a perpetual explosion, making each breeze feel like it’s coming from a giant hair dryer.  My knees ache from 20 years of tedious plumbing jobs.  I’ve just exited Coldstone Creamery, and directly in my line of sight lies the big red and white sign with a cartoon ice cream cone, hanging above the brick edifice with its array of peculiarly smudge-free windows.  As I slowly run my tongue over my double scoop of mint chocolate chip, I observe the seemingly happy employees in white paper hats performing repetitive motions.  The thing about Coldstone is, every time you tip your server, he or she and all the other servers burst into song.  Like a real, honest-to-God song.  So, see, I like Coldstone Creamery, because it’s the only place I eat at where I can genuinely feel good about not tipping my server. 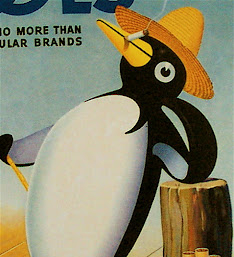 Unknown said…
This is more what I expected you to be writing. Taking on big tobacco marketing to children... a little bit on the nose, er-- beak, don't you think?
November 28, 2012 at 6:49 PM