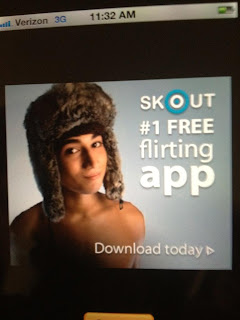 I'm not trying to brag, but I'm pretty good at Words With Friends. Or maybe I am trying to brag...it's been long enough since I felt pride that I can't really say for sure. Anyway, I'm not trying to pull an R. Kelly and say I'm the world's greatest or anything. Though I have in the past pulled an R. Kelly, by other meanings of the phrase.
I fear I'm starting to lose my point.
Oh yes, Words With Friends. So anyway, just like the rest of the country, I enjoy playing it. I mean, it's no Magic: The Gathering or anything, but in terms of free cell phone games it gets a hearty thumbs up from yours truly. Now, I understand that in order to play Words for free, I have to put up with advertisements inserted into the middle of my games. I'm completely OK with this, since Lord knows I'm in no position to pay money for anything. My dinner for the last three weeks has been plain white rice with sriracha sauce due to a case of what Ted Nugent would call Cash Strapped Fever. No, the ads themselves are not necessarily a gripe of mine, so much as the image displayed in one ad in particular. The image to the left illustrates what I'm talking about.
Seriously, there is so much wrong with this. First of all, who is this motherfucker? Is this what humanity has come to? Why is he nude from (at least) the waist up while wearing a heavy fur hat? I know those things trap heat well, so maybe he took his shirt off to balance it out. Maybe his father died in a tragic hunting accident in the wilds of Minnesota. Maybe he cannot remove the hat due to some hideous skull deformity. While I sympathize, I see no reason why this image needed to be preserved via photograph and delivered to me moments after I drop a hot QI on the triple word score square. Judging by his hairless, narrow chest, he appears to be either 14 years old or a mannequin. Judging by his little smirk, he's very pleased with himself about something. I suspect that he's a sadist, deriving pleasure from the rage he stirs up in my increasingly Baconator-ravaged heart.Or maybe he's just what young people look like these days. I don't know...I'm thirty years old.
Either way, what an asshole.
The worst part of this whole sordid affair, and what really herds my goats, is that this is an advertisement for a flirting app on the iPhone. Join Skout, it promises you. You too could have this man writhing around on top of you, if you just join Skout now. Advertising is supposed to present the ideal vision of the product or services being advertised, hence why the Baconator always looks better on television than on my plastic tray. But one has to wonder if this fellow is really the right representative for this service. If it's a face-punching app, then sure, absolutely. But in this case, is this really the best Skout can do? If I'm signing up for a flirting app (what exactly does that constitute, anyway?), it had god damn well better offer me more than a smug child with hypothermia. The last thing I need is to be flirting with a woman whose best attribute is that she has an almost-detached Siamese twin. If I want that, I can just go to Bakersfield. Although now that Tilted Kilt is closed, I don't have much reason to.
Whew. I need to calm down; I'm getting too worked up about this. Maybe I'll kick back and play a nice, relaxing round of Words With Friends. Hmmm...aw, sweet, I can play the word AZURE. Nice, 47 points! This game is going really...oh no...no, not again....not again...GOD DAMN YOU, SKOUT!!!
baconator decline of western civilization flirting app joey marsilio skout words with friends