My Holiday Dinner with Grimace 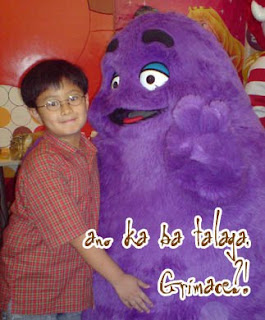 The holidays are a spectacular time of year, a season where the chilly weather is counterbalanced by the warmth and cheer of spending time with our loved ones. I am a deeply compassionate man, though, and as a result such mirthful activities at times lead me to feel pangs of sadness for those among us who lack family and friends, who have fallen on hard times and who could probably use a little cheering up. Recently I decided to don my Santa hat and give the gift of conversation and whiskey to an old friend who has seen better days.
You probably know Grimace from McDonald's long-running and moderately emotionally scarring ad campaign for children, wherein Grimace is one of the characters often seen frolicking among sentient food items. Like his compatriot The Hamburglar, Grimace was introduced in a villainous role during the early days of the ad campaign, but Grimace was quick to change his ways (and appearance) to become the cuddly amorphous blob we all know and...well, not love...I mean, that's a little much, don't you think? Do we really have to put a label on our feelings, Grimace, especially at this point in our relationship? I'm really starting to fell smothered here.
I fear I may have gone off track. Anyway, I had heard through the grapevine (specifically, from the California Raisins, who now perform on cruise ships for mescaline money) that my old childhood buddy Grimace had been having some issues lately and was being a regular Ebenezer Diabetes, so in the spirit of Christmas, I had him over for a home cooked meal, some nice conversation, and what was in retrospect far too much Wild Turkey. The following is a partial transcript of our conversation:

Grimace: Yeah. And I'm sure that's just how you like it, isn't it?

G: No need to pretend, Marsilio. You're just like everybody else...don't want me around anymore. Like I'm some kind of a MONSTER.

J: Well, I mean, technically, aren't you a monster? Like, by the definition of monster, isn't a big weird purple creature unlike any the world has ever seen a monster? Just sayin'.

G: No, that's just what they want you to think. The real monster is the media. Have you seen what they've done to me?

J: Yeah, I was going to ask you about that...I mean, the scandal with that Japanese kid...you have to admit, the photo (ed. note-see above) was kind of sketchy. Didn't look too good for you.

G: See? More media fabrication. Look at the picture again; clearly, I'm not touching that kid. He's touching me. I'm the one being violated there. I'm clearly uncomfortable, and trying to wave him off. I was the real victim, and this is all a big setup.

G: I get it. You're trying to say I like young meat, right? Young meat? That's hilarious. Just hilarious.

J: No, no, it's not like that. It was on sale, and I found this great veal recipe online. It's supposed to be very tender.

G: Like the tender innocence of a child? Is that what you're trying to say?

J: No! Like the tender meat of a calf.

G: Your similes just get more and more nauseating.

J: Let's just take it easy here. The whole point of tonight is to cheer you up. Why don't you just relax...sit back, have a drink.

G: "Oh, have a drink, Grimace! Just keep on drinking and maybe it'll all go away!" You sound just like my ex-wife. I have half a mind to give up trying to be a good guy and just go back to being a villain...at least then all the negative things people say about me would be justified.

J: I've been meaning to ask you about that. Why did you choose to be a good guy, anyway? What made you decide to renounce villainy in the first place?

(Grimace chugs whiskey straight from the bottle for 11.3 uninterrupted seconds)

G: Fine. You really want to know? It was never my decision at all. They forced me.

G: Well, when I first came onto the scene, I had four arms...look it up. Four arms. Not two.

J: What are you saying?

G: Isn't it obvious? They cut the other arms off. McDonald's forcibly amputated my arms. I just woke up in a bathtub full of ice one morning with a headache and two missing arms, and a note that said if I ever acted up again, the consequences would be even more dire. It wasn't signed, but I know Ronald's handwriting when I see it.

J: I see. Thank you for telling me that...it can't have been easy for you. Now, I suppose I have a confession for you: I already knew that whole story.

J: By the way, are you enjoying your meal? Nice and tender meat, eh? Just melts in your mouth.

J: But I haven't been completely honest with you, Grimace. You see, that's not veal at all. It is in fact something far rarer and more extraordinary...a very unique sort of meat indeed.

(Grimace stares at his plate)

G: What are you saying?

J: Look again, Grimace. Look at that purplish hue...no amount of piccata-style preparation could completely eliminate it. Taste the gooey, fatty goodness. Anything familiar about it to you, Grimace?

J: Ah, it looks like you're beginning to understand. Yes, Grimace, yes! How does it feel to be eating your own arms?

J: You see, Grimace, I may have lied to you about the nature of the meat, but you and I know I'm not the only liar in this room. And we both know that your guilt eats away at you every day, eats away at you like you've been eating your own arms!

J: Two reasons, Grimace. One, McDonald's sponsors this blog, and they asked me to send you a little message to keep your hands off of innocents from now on. Which I was only too happy to do, because two...

J:...I was that little Japanese boy.

Gventuso said…
it's so like you to ensnare someone to commit cannibalism with delicious animal cruelty
December 17, 2010 at 3:50 PM

Garrett Steel. said…
Love Ebenezer Diabetes. Love that this shows hints of an homage to my dinner with Jesus Christ blog. Love the ending. Well done, Marsilio. Would love to see this poorly animated somehow.
December 20, 2010 at 1:27 PM