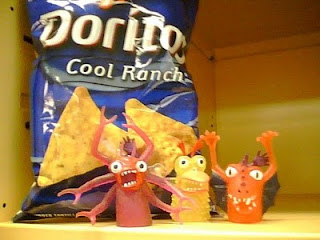 Anyone who actually listens to and remembers my incessant babbling about trivial nonsense (a limited crowd, to be sure) is probably aware of a gripe of mine that I have held for some time. That is, of course, an overly vague and nebulous bit of information, as my list of gripes could probably fill your average grain silo, were they in some sort of tangible form; one way of achieving this might involve using a label-making machine to print out adhesive white stripes of bitching. So, in the interests of specificity, let me give you a bit of history, that you may understand the level to which this particular issue concerns me, and has for some time.
Back in January, 1995, Doritos introduced a radical (I may be using that term too loosely) redesign of their line of flavored tortilla chips, in response to what Wikipedia claims vice president of tortilla chip marketing Roger J. Berdusco claims was “greater competition from restaurant-style tortilla chips, that are larger and more strongly seasoned.” Though I cannot honestly say I found the redesign to be exciting (I had Super Nintendo, so it was going to take more than Doritos to raise my heart rate [due to excitement, not due to excessive sodium consumption, which Doritos were in fact excellent at]), I do recall the first time I laid eyes upon Cooler Ranch chips, the new, more X-treme version of my original favorite, Cool Ranch (this is a bit misleading, as my true original favorite was Nacho Cheese. An incident in which I consumed monstrous amounts of Nacho Cheese Doritos and root beer and ending up vomiting on the floor soured me on that flavor, though, so their relaunch as Nacho Cheesier Doritos had negligible impact on me). I loved the Cooler Ranch Doritos, as their luscious blend of buttermilk and other ingredients I don’t remember created a potent, scrumptious flavor. I was in hog heaven with my handful of red-and-green flecked chips.
As the years went by, though, one element of the chips got under my skin: the name. Cooler Ranch? What exactly were they cooler than? The only logical explanation is the original Cool Ranch chips, but as time went by and Cool Ranch became a memory, the Cooler Ranch moniker was not only unnecessary, but utterly irrelevant. Cooler Ranch, as a name, only made sense in the context that there was a Cool Ranch to be Cooler than, so after Cool Ranch had been dead for a few years, Cooler Ranch became an anachronism. The passage of time transformed this fact from an amusing bit of trivia to an outright annoyance, due to my unwavering devotion to accuracy. Besides, I felt like a fool saying “Cooler Ranch,” knowing that I was perpetuating a term that I personally found imbecilic. My crusade to resurrect the original Cool Ranch name was tireless, consisting mainly of complaining loudly in the grocery store to no one in particular, and writing the occasional online opinion piece. History will remember me for staging a massive letter-writing campaign to Doritos to demand a name change, but I never actually did that. Regardless, my hopes have been dimmer than the lights at the Homestead Lounge (bit of local humor there) that my desires would ever be fulfilled.
Lo and behold, I find myself at Target the other day, and I end up staring right at a line of text I never thought I would see anywhere other than an online opinion piece or an illusory letter of complaint: “Cool Ranch.” Fifteen years later, after all the tears, all the anguish, all the dashed hopes and broken dreams, Doritos has finally restored the good name of Cool Ranch, thus putting an end to my seemingly quixotic quest. I don’t think it is hyperbolic in the least to say that I know exactly how Nelson Mandela must have felt. Thus closes an agonizing chapter in my life.
I should note that my unwavering devotion to accuracy does not extend to correspondence pointing out how pointless and misguided my passions are.
Cool Ranch Cooler Ranch Doritos Nelson Mandela

Garrett Steel said…
I only hope that one day Clint Eastwood makes a film about you with Matt Damon in a supporting role. I wish I read this post BEFORE I hit the liquor store for dinner, as I certainly would have picked up some "Cool Ranch" chips in honor of this momentous day.
February 15, 2010 at 10:47 PM

James Prescott said…
I have always been curious, was cooler ranch different in anyway other than more seasoning? Very strong blog, now perhaps your wandering soul can get some much deserved rest.
February 22, 2010 at 12:33 AM