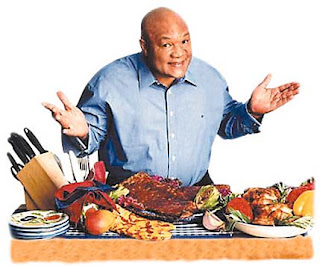 I've been trying to eat less red meat lately. Not because of its potentially detrimental effect on my health, but because red is the color of Communism, and Lord knows I don't want to get blacklisted. Then again, a friend of mine lives in a Communist country (China), and seems to enjoy the hell out of it, so who am I to judge? I suppose having to use a proxy server to log into Facebook has its own unique charms.
Regardless, I was feeling like steak today, and I don't mean the steak they serve at Taco Bell. Not that I want Taco Bell anyway, after the Five Layer Burrito took my digestive system through the Nine Circles of Hell. So I ventured to the grocery store and bought a steak, some salad and a Sapporo Reserve (it was on sale). Upon my return home, I slapped the steak on the old George Foreman Grill-still going strong seven years later-and poured my Sapporo into the only glass that could contain it, the Samuel Adams Octoberfest beer stein that I fought valiantly with Brittania Arms security to take home with me on Halloween. The steak turned out quite well, in that I didn't need to apply any sort of sauce to it to make it edible, and I was in relatively high spirits as I began my post-meal cleanup. While I was washing the dishes, however, my enthusiasm was dampened by the forceful reminder that I was dealing with the single most annoying item to hand-wash I have ever encountered: the damn Foreman Grill drip tray.
I've never been a big fan of washing dishes on the first place. Even though it was one of my appointed chores when I was younger, I never grew to enjoy it. Quite the contrary. In my defense, I think I have some valid reasons why dish washing might carry a bit of a negative connotation in my mind. For example, no one ever told me that there was a difference between the dish soap used for hand-washing dishes, and the soap that goes into the dishwasher. It seems obvious now, but as a child, how was I to know? So, in an attempt to be helpful, I loaded up the dishwasher, filled the soap tray with Palmolive soap intended for hand-washing, and promptly flooded the kitchen with suds, for which I was severely reprimanded. Another time, I was loading the dishwasher while my father, clearly drunk and probably on some sort of medication or another, expressed his displeasure with the tone of my voice by hurling a foot-long screwdriver at me, blade first. It missed me by about an inch, shattering several glasses that I had just placed in the machine. In retrospect, I'm surprised I ever went into the kitchen at all when my father was home.
But I digress. As I was saying, the Foreman drip tray is a beast to wash. In and of itself, it is a small plastic article that seems harmless enough, and in fact looks exceedingly easy to wash. In some ways, it is, but the very elements of it that makes it a great (or at least serviceable) drip tray make it a devil of a wash. The curvature of the tray is guaranteed to, upon exposure to a running faucet, direct a spray of tepid water right into your stomach, or, if you are particularly unfortunate, your face. Now, if you're the sort that enjoys the simulated sensation of a baby or small animal urinating in your face, than the Foreman Grill drip tray is your rock-n-roll fantasy come true. But if you're like me, a neat hydrophobic with a devilishly handsome countenance, you'll sorta-kinda hate the damn thing for pissing all over you while you try to keep it clean. Maybe that's why I shouldn't have kids. That or the drinking problem.
This is not to say that washing a drip tray is my biggest housekeeping pet peeve. That honor would go to the elimination of vermin, which my current apartment has quite the abundance of. The spider in my mattress last week that did an impersonation of Benicio Del Toro in The Hunted (obscure reference alert!) was bad enough, but the icing on this particularly loathsome cake was the time I came home from work to find dozens of baby spiders descending from the fan in my bathroom ceiling. I unleashed a mini genocide on the tiny arachnids, leaving me in a very long, cold sweat as I checked the bathroom every few minutes to see if more of the creatures were dropping. Almost every time, more were. My girlfriend did make me feel sort of bad about this whole affair afterwards, when she portrayed the baby spiders as bright-eyed, idealistic youngsters, parachuting into the world full of enthusiasm.
"Wheee!" said the spiders. "It's Joey! I bet he's going to be so happy to see us! Gosh, we're just gonna have so much fun together! Wait...wait, what are you doing? No, Joey, no! Why? WHY?"
I was bizarrely moved by this preposterous idea, to the point that, a couple weeks later, I noticed one of the baby spiders had escaped my notice and set up shop in the corner of the bathroom. Contrary to my previous behavior, I left it alone. Then a few weeks later, I noticed it had grown bigger. So I killed it.
dishwashing foreman grill spiders trauma

Garrett Steel said…
What the fuck is up with the 5-Layer burrito at Taco Bell?!! I agree totally, only had one and it done made me sick too. Which doesn't make any damn sense because it's the same exact same ingredients as everything else at Taco Bell.
Also, your girlfriend is like that terrible commercial where animals are suffering and begging for you to save them while Sarah MacLachlan is wailing mournfully in the background. You should have slapped Gaby, or at least told her to shut up. I feel safe writing that here because your girlfriend doesn't read your blog. Now she probably will. You just watch. It's inevitable now, and she'll be upset with me but you'll be the one who has to deal with the fallout. MWUAHHHAHAHAHA!!~!
January 17, 2010 at 1:39 AM

James Prescott said…
That's sad to hear about the five layer burrito, but I think the culprit is probably the nacho cheese. Their nacho cheese is fishy as the shrimp cocktail at the homestead lounge.
February 22, 2010 at 12:40 AM

Anonymous said…
Not sure where to post this but I wanted to ask if anyone has heard of National Clicks?

Can someone help me find it?

Overheard some co-workers talking about it all week but didn't have time to ask so I thought I would post it here to see if someone could help me out.

Seems to be getting alot of buzz right now.