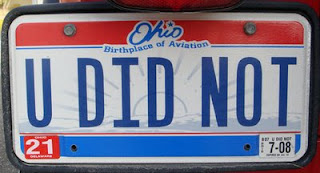 Maybe it's just me, but for some reason I am unreasonably irritated when I see stupid things on display while I'm driving. Perhaps the fact that the stupidity is linked to travel causes me to make the assumption that it will be more widespread than traditional, sedentary stupidity. I don't know; trying to figure out the whys and hows of my psyche is like trying to do a Sudoku puzzle immediately after being stabbed 23 times.
For a while, the object of my ire was a license plate that I saw during my travels (to the liquor store). It was attached to a hybrid car (maybe a Prius, I'm not sure), and it said, "MPG X 2." Now, I'm as liberal as the next UC Santa Cruz graduate, so if you're driving a hybrid, more power to you. But the fact that this guy, after purchasing his hybrid, was so enamored by his miles per gallon that he had to go out and spend extra money to trumpet to the world "I DON'T HAVE TO BUY GAS AS OFTEN AS I USED TO!" reeks of assholism. It's not exactly a contradiction or irony, but...well, it just really annoyed me. Great, twice as many miles per gallon. What do you want, a cookie? Because I do.
Anyway, the license plate was recently supplanted on my Pedestal of Ire by one of the strangest bumper stickers I have ever seen. I was just getting on the freeway at the start of a trip to Los Angeles, and was dumbstruck when I read the bumper sticker on the vehicle in front of me. Next to an indecipherable image, the sticker read, "Taliban Don't Surf!" I had to read this a few times, because I could not quite grasp it. It was a declaration of a fact I had never even thought to question, and an emphatic one at that. The bumper sticker may as well have said, "Wildebeests don't tap dance!" Actually, I think that's preferable. I mean, of course Taliban don't surf. They live in the desert and the mountains. They couldn't even surf if they wanted to. Unless they wanted to sand surf, or something...but that's stupid. It's not like they're fucking Jawas or anything.
I wonder about the chain of events that lead to this bumper sticker's existence. I imagine the genesis was something like this:

Even putting aside the insane fact that someone thought of it in the first place, someone had to think it was a good enough idea to put money into producing the damn things. And then some store owner had to like them enough to stock them (for whatever reason, I find this the easiest part of the scenario to imagine). And THEN someone had to actually like one enough to buy it and put it on his car. This is the part of the process that I witnessed. I don't understand how the idea had such legs that it managed to get through all those channels.
At this point, I sort of hope they make a movie called "Taliban Don't Surf!" It could be like "Cool Runnings," except with Osama Bin Laden in the John Candy role. A young Taliban boy, who always dreamed of surfing but is constantly reminded by his terrorist bretheren that his environment is not conducive to watersports, one day realizes his dream and catches a gnarly wave as he surfs a bomb right into the Statue of Liberty. I don't think this would be a very popular movie or anything, but at least then there would be some reason for the bumper sticker's existence.
Bumper stickers License Plates Taliban Wildebeests

Garrett Steel said…
I think trying to do anything other than bleed profusely would be difficult after being stabbed 23 times. -- The California Colonel
June 12, 2009 at 1:06 AM